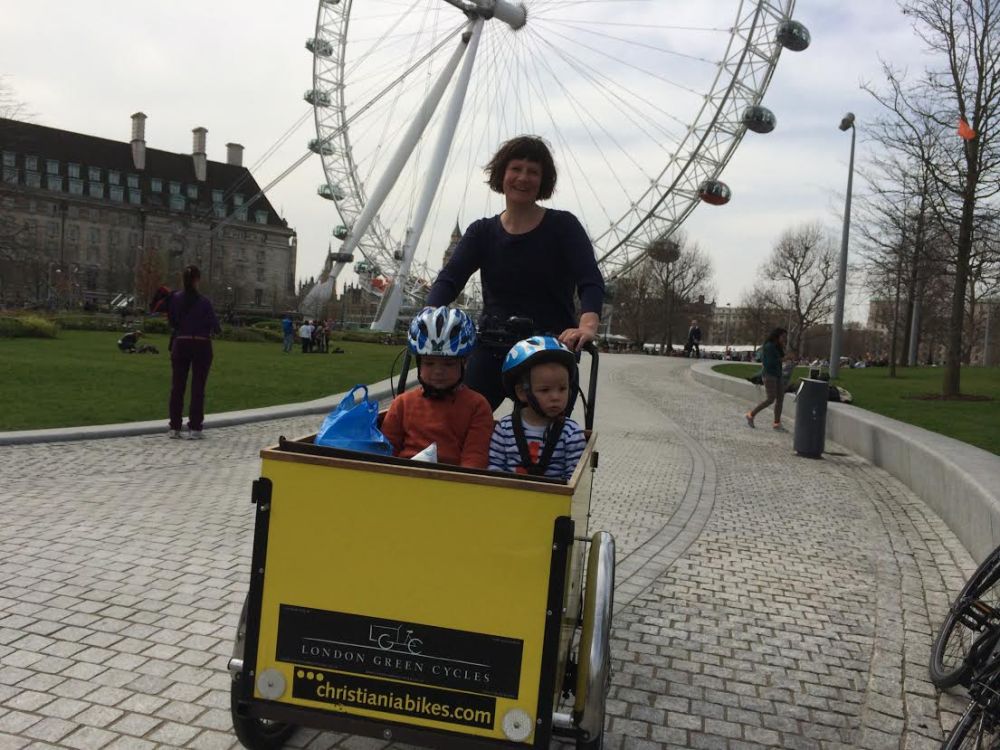 The sun is shining and we are more than half way to kindergarten and my
three-year-old son is shouting, ‘You can do it,’ as I frantically pedal
up one of Crouch End’s minor mountains aboard Tilly, our cargo bike.
Thankfully, as well as the cheering, I am assisted by an electric motor
and soon we arrive at the top of the hill with a shout of, ‘I can see
Grandma and Granddad’s house in Australia’. Then we are coasting downhill
with aforementioned three-year-old and his 18-month-old brother each with
hands in the air shouting ‘Wheeeeeeee,’ at the top of their lungs. 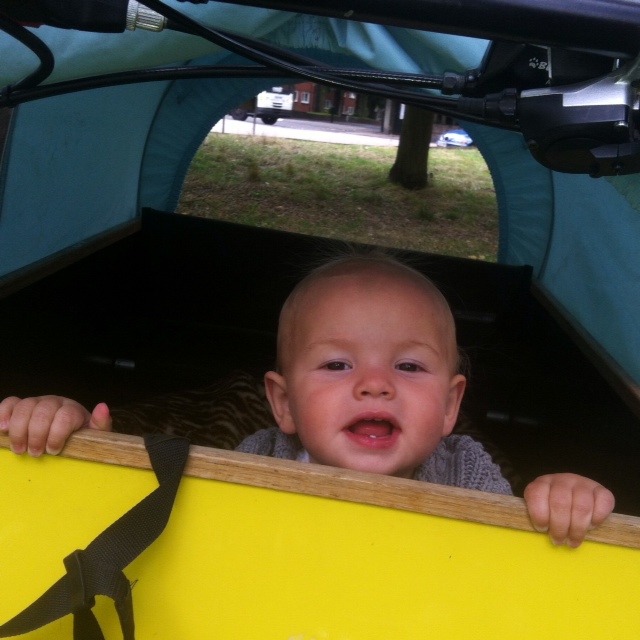 Cargo or freight bicycles were developed to transport wares and now
include options with platforms or boxes for carrying cargo – or children.
Those designed for children come equipped with seats and seatbelts and
various styles of covers to assist with weather protection, of the
children that is, not the human engine. For those, electric assist models
have a re-chargeable battery powering a small motor. For safety reasons,
the motor kicks in only when you are pedaling, and only after one and half
pedal revolutions so not offering free ride.

Cycling is my favourite mode of transport in London and I had long coveted
a cargo bike. So when my husband and I decided that our eldest son would
attend a kindergarten three miles from home, I started dreaming. We do
have a car but my husband, a landscape architect, often needs it for
travel to far-flung sites not easily accessible by public transport. To
get to nursery we could catch two buses or one bus with a 15-minute walk;
all entirely possible with a three-year-old and an eighteen-month-old save
for the frequent and unpredictable occasions when we couldn’t get on a bus
because the pram spaces were all taken. And then there was the cost of
four trips per day for the kindergarten drop off and pick up.

So I spent the summer trialling various cargo bikes and loving every
minute of it, as did my boys and all the neighbourhood children who begged
a ride around the block whenever possible. Two things became clear,
firstly that we needed electric assist to cope with the hilly journey
between home and kindergarten even though everywhere else across London I
managed happily without electric assist and I am no Victoria Pendleton.
And secondly, it would be difficult to afford the £3000 needed to purchase
an electric assist model. Luckily, London Green Cycles were selling Tilly,
a pre-owned Christiania Maxi Light tricycle with electric assist, a bright
yellow box and seats for four children.

The best thing about transporting my sons by cargo bike is that we are
always chattering. We all face the same direction and they are in front of
me which somehow makes interaction easier than in a car. We also interact
more with the people and places we pass than we do when driving. The boys
are always pointing out sights which catch their attention, and I love the
shout they give when we go under a railway bridge.

I notice that I am smiling just metres from home on the outward journey
despite the chronic stress induced by getting everyone out the front door
each morning. On every journey, strangers smile or wave or stop to chat,
which in turn makes me smile even more. I am not a jogger and I don’t like
gyms and for the first time since having children I am enjoying some
regular exercise. We can also fit grocery shopping, spare clothes and two
scooters in the box, though I definitely notice the extra weight on the
uphill. 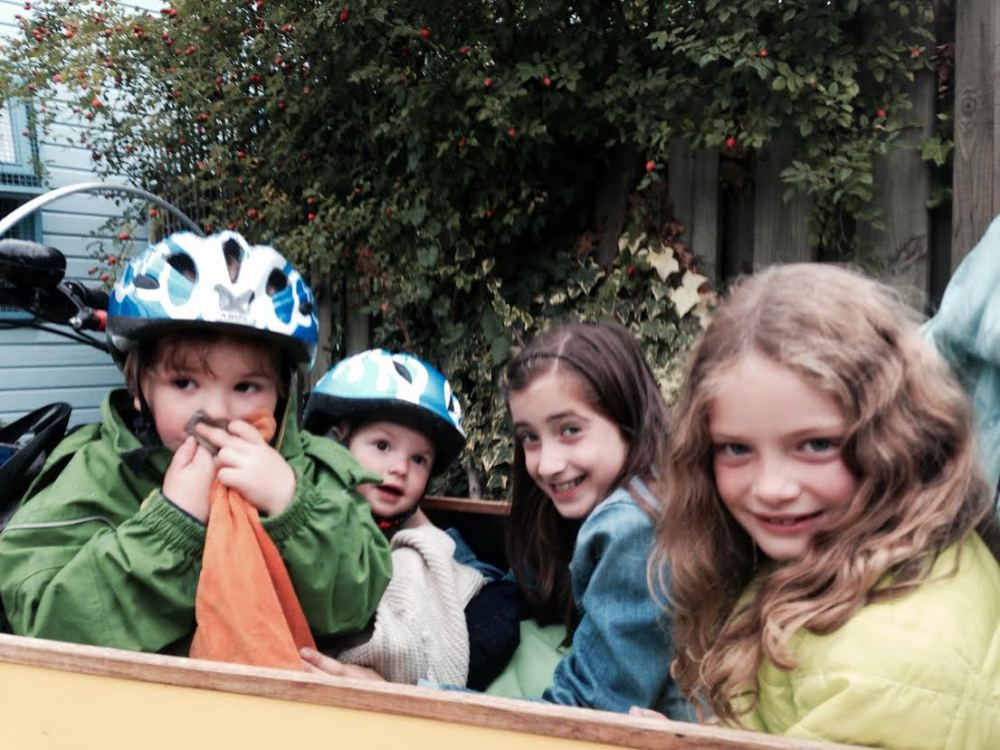 Roman Magula owns London Green Cycles, a specialist cargo bike retailer.
‘Cargo bikes for trade and families are on the increase in London,’ he
tells me. ‘Several local authorities are running projects to encourage
local businesses to use cargo bikes in place of cars’. Two are Businesses
Control Couriers, the first co-operatively run courier firm, and the
sandwich chain Pure, and Roman is often asked to make creative alterations
to cargo bikes such as a freezer for an ice cream vendor, or a
touch-screen computer for the RSPB to cycle around parks.

However, Roman believes that families hold the real key to improving
quality of life in London. He says ‘just imagine if 150 families in one
local area replaced their cars with cargo bikes for the school run. There
would a huge reduction in traffic, less demand on parking, less noise and
air pollution, making a better environment for everyone.’ He hopes to work
with several local authorities this year to introduce cargo bikes to
families via local schools and nurseries.

He acknowledges that safety is the key issue for families and welcomes
Boris Johnson’s promise to spend over £900 million on creating a bicycle
network across London. He assures me that London Green Cycles are making
every effort to ensure that Transport for London includes cargo bikes in
future cycle infrastructure like cargo bike friendly cycle parking, and
ensuring paths and throughways are wide enough.

When considering the cost of a cargo bike Roman suggests a longer-term
view. ’While a cargo bike might seem comparable to the price of a cheap
second-hand car, the running costs are negligible in comparison, and with
cargo bikes you do not pay insurance, petrol, congestion charge, road tax,
MOT or parking permits, fees and fines. The maintenance is also lower
compared to motor vehicles; a new cargo bike will generally need no
maintenance in the first year and around £100 every year thereafter.
Furthermore, in the current market cargo bikes are keeping a surprisingly
high re-sale value, so when a family outgrows their cargo bike they are
often able to get a significant return. For example a five to
six-year-old, good quality and well-maintained cargo bike will often
retain over 50% of its purchase value.’

Louise Lord is a freelance writer interested in the people part of sustainable development She can be contacted by email.